Starring Emma Livry as Herself

At work we are staging a production that requires the leading lady to "fly" up off the stage and through the lighting array above. Which is all well and good in a show that doesn't involve actresses with copious swathes of floaty and highly flammable silk fabric draping artistically off their bodies. We are pretty much all cringing and whispering furtively amongst ourselves about flaming actresses and the much-less-than-impressed audience's reaction to same.
"What an amazing special effect! And the acting! The way she screams like that! So realistic! GIVE THAT WOMAN A TONY!"
Anyhow. I am certain that one way or another (vats of industrial strength flame retardant are being ordered) we will not end our sad theatrical careers with a horrible and dramatic tragedy. But, it's part of our consciousness, isn't it? Everyone you meet will know that people have died when their costumes caught the oil lamps used to light stages back in the day. It's mostly thanks to this ballerina: 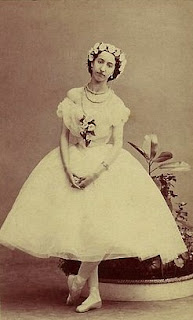 Emma Livry who, in 1863,  burst in to flames on stage and later died from her injuries. The most frustrating part of the whole ordeal is that she would have been fine if she'd stopped, dropped, and rolled like a good girl. But OH NO she had to be the drama queen and run flailing around the stage for several minutes. It must have been quite a show.
Posted by I Will Fly at 12:29 AM