Two Posts in One

I have been stuck using the portable barres at the studio, lately (which is a story that involves me being annoyed with someone else for not understanding ballet etiquette, and this story is SO bitchy that I am refraining from telling it) which is irksome because a) sometimes there isn't quite enough space on them so you get stuck hanging over the end or trying not to grab on to the hand of the person on the opposite side, b) sometimes they get set up sort of wonky so that they aren't at a 90* angle to the mirror (or the seams in the floor) so I spend the entire time feeling off-center, and c) they are metal so I create a loud CLANG! every time my left hand touches the barre. Either I am just super-conscious of my own clanging or no one else is having this problem. This is grown-up class! Where are your wedding rings? I am not dissing anyone who takes theirs off, it's just that I am lazy and forgetful and so I basically never remove mine. In the bath tub, doing dishes, digging around in the garden, changing the oil in my scooter, baking bread... whatever. There are reasons I do not wear fancy diamond things with bits all sticking out.
ANYWAY.

Cemeteries are one of my great passions (I have a lot of great passions, okay?) and in the world of Pinterest I recently discovered this photograph: 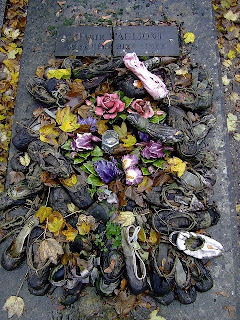 Which claims to be the grave of Marie Taglioni in the Montmartre cemetery. And I thought : "OOOH AWESOME!" It's kind of gross but also very beautiful. It's become a sort of shrine for dancers, the pile of decomposing shoes an offering to the memory of the first famous modern ballet dancer. Definitely something to see someday, a pilgrimage site for the future.
But, I was intrigued enough to do some research online and discovered that there is some confusion about this particular grave site. It actually isn't Marie Taglioni's grave, but the grave of her mother (who was a dancer, though not the kind of celebrity her daughter became). So... all those shoes are in the wrong cemetery. In fact, Marie Taglioni's actual grave is in the Père-Lachaise cemetery (where all sorts of other famous dead people reside). Here is an article but it's all in French. My own French is pretty rusty but I can work out the general gist of it.
This is what Marie Taglioni's actual grave looks like: 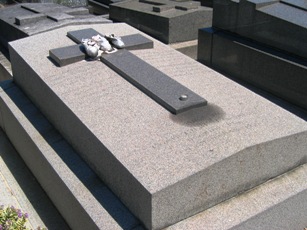 Much less dramatic but at least there are some shoes up there! If I ever visit France I would definitely make this a destination and add a shoe to the site.
The downside to living in the western US is that our history goes back about 150-200 years and then drops straight off. We have some really interesting cemetery history, but it's nothing like the incredible history of Europe's cemeteries.
Posted by I Will Fly at 1:49 PM