But, no. We are here, my friends, to discuss the worlds of ballet and rheumatism and the exciting, sometimes dreadful manner in which they collide.
Out of a horrible pang of guilt at the thought of always refusing to participate in the studio's annual recital (let's face it, honey, even if I wasn't working on weekends this Summer I still wouldn't be signing up) I volunteered to alter and mend (and generally "clean up" and "make pretty", which are the nice terms we use in the professional world when something really heinous crosses our path) the rather elderly and decrepit costumes the ladies (and... possibly a gent. At this point they are considering an en travesti Romeo, because we don't appear to have any dudes available) will be wearing. There is a lot of shattered chiffon and several oddly not-quite-complete bodices going on here. There may well be a few atrocious sequined powder-puff tutus at some point, as well.
We shall see how badly I regret this offer a month from now.

In preparation for said recital tonight we practiced a lot of ballet running. I did well at it, as I generally do with ballet walking. My teacher declared that I must have been practicing but I will let you in on a secret: I haven't been. There is a story behind this, though.
When I was about 14 or 15 my pet cat was hit by a car. She was in terrible condition for a long time afterward. One of her hind legs was dislocated at the hip. The other was mangled so badly that it had pins in it for a while, but in the end it had to be amputated. She needed a lot of serious care while she was recovering, and so I would pick her up and carry her very carefully. I realized that the impact from stepping while holding her was hurting her and so I started to mindfully mimic the way a ballet dancer walks whenever I carried her. Toe first, gentle knee bend, toe first, gentle knee bend. For the rest of her life I was the only person she would allow to carry her.
So, my mad ballet walkin' skillz are entirely thanks to a little grey cat with three legs.
Thank you, baby girl. I miss you. 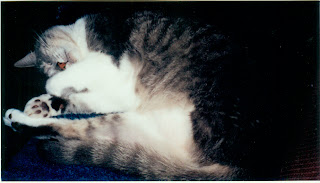 Email ThisBlogThis!Share to TwitterShare to FacebookShare to Pinterest
Labels: ballet, blog, cats, class, costumes, I'm just not very good at this dancing thing let's face it, jakome, recital, running, sewing, that isn't what this blog is about actually, walking