Okay! So Halloween is coming up. And that means women in far too skimpy "sexy" costumes getting rat-faced all weekend. And we all know (or SHOULD know) that I am kind of a clothing construction and costume geek. It's what I do, darlings (read that "DAHlings" and remember to sound as snooty as possible. Or at least like Edina from Absolutely Fabulous). Anyway... so last year I was expecting mountains of ladies in their gigantic "Black Swan" costumes to be hogging the club floor, but in reality Halloween was on a Monday so the evening's entertainment largely consisted of my husband and I, and about half a dozen other working slobs dressed in comfortable shoes and drinking conservatively while watching bands play and checking our watches every few minutes because duh we have to get up in the morning. I saw pictures from other people's Halloween nights, though, so I know the skanky Black Swans were out there (I was a fully clothed white rabbit from Alice. Very very clothed. Not even a little bit sexy). I think there will be more this year, though, because companies have had an entire year to get their designs sorted and their stuff produced. Out of curiosity (okay, because I felt like making fun of something) I checked out Trashy.com's ballerina costumes. Because Trashy (despite it's awful name) is known for it's elaborate and fist-clenchingly expensive "sexy whatever" costumes that are then ripped off by everyone else in the industry. Wait, wait, wait... is this a sexy storm trooper costume? Sigh...
Anyway, here is their "Black Swan" costume: 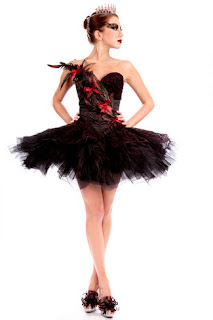 All things considered, aside from the unfortunate amount of visible butt cheek and a certain wobbly shapelessness to the skirt (and the stripper heels), it's not that bad. At least, considering some of the things that are out there. Of course, since this getup tops the charts at about $600, the fact is that you could buy a REAL tutu for less money. Not that it would be the crème de la crème or anything, but sheesh, it would at least be shaped properly, and probably cover your butt cheeks. You could even wear stripper heels if you want, though really if you're going for ballerina you need to go all the way. Heels do not equal ballerina. At least get some flats and tie a ribbon around 'em.
On a different, ranting note: am I the only one who thought it was seriously annoying that the movie refused to used the names Odette and Odile and dumbed it down to "black swan" and "white swan"? Any real dancer would already know those names. But then, real dancers have lives, and real ballet directors live in one bedroom apartments with cockroaches, so what am I doing splitting hairs?
Posted by I Will Fly at 1:03 PM