Yesterday while buying pointe shoes I discovered that Betsy Johnson is now designing dancewear for girls, and it's adorable.
Why you no make grown-up sizes, Betsy?

I NEED THIS SHIRT IN MY LIFE: 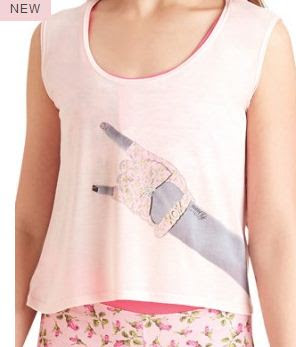 I WOULD wear this shirt to a punk show. I would. make it happen, people!
Posted by I Will Fly at 10:59 AM 2 comments:

My Cats Utterly Refuse To Make Me Rich and Famous

Dammit, kitten. I keep you around for photo ops and you-tube-ready shenanigans, and you won't even pose for me with my new pointe shoes? PSSH! Such a ripoff. 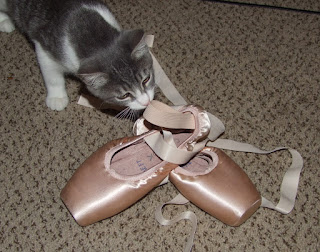 In other news: I am still alive, but it's been a rough summer and I am just trying to get through the next three weeks without setting myself on fire in a blind rage. I took a few weeks off dancing, but I'm (mostly) back at it, now. New kitten. New shoes.
Posted by I Will Fly at 4:24 PM 3 comments:

Email ThisBlogThis!Share to TwitterShare to FacebookShare to Pinterest
Labels: ain't no grumpy cat, all you ever do is cost me money and give me nightmares about losing you, cats, kitten, perdita, photos, pointy pointy, shiny and new, totally useless creatures, why you no make me rich?

Workin' workin' workin' workin'...
As I plow in to the final few weeks of recital sewing for the year I face down the largest challenge of the season. Because apparently making ten firebirds and ten gnomes and ten rabbits wasn't enough...
Dragons. I'm suppose to be making dragons. Mostly what I am supposed to be making is miracles. "Here, take this 30 year old leotard that looks like someone ran over it with a car and make it in to something fabulous. But not TOO fabulous, because we have to be fair to all the kids. Have fun with that!" Sigh...
My task is to make dragon costumes from around the world. Dragons for many cultures and countries. Which is commendable enough, but for cryin' out loud.
My "Egyptian" dragon was given to me as one extremely ugly nude unitard and a picture printed out from Google image search. It is a nice enough drawing, very pretty, but I am pretty sure that it has very little to do with actual mythology. Egyptian history is divided in to the Old Kingdom, Middle Kingdom, and New Kingdom, right? I think of this dragon as coming from the DeviantArt Kingdom.
Anyhow. The dragon has no feathers, no scales, no demonstrably "dragon" characteristics. It has wings but I didn't really want all of the dragons to have wings because so many of the dancers are also going to be firebirds. But the only other really distinct features of this drawing are it's collar and cuffs (which I did) and it's long pointed tail.
Now, let me tell you something about tails on stage. I learned this while working on a professional production of CATS! several years back: from stage there is a REALLY fine line between what looks like a tail and what looks like a great big novelty wang. On a nude bodysuit it was just... not a good look. I do not want the little boy wearing this costume to be mercilessly taunted about it for the rest of his life. I mean, it's bad enough he has to be the only little boy on a stage full of girly girls anyway, right? So, the tail was vetoed. Wings it is. Of course, Egyptian wings are awesome and amazing, but also super annoyingly intricate. This whole costume has been a lesson for me about not biting off more than I can chew and simplifying everything because no one but me will notice the difference anyway.
I will present this costume to the gal in charge today, here's hoping it is met with a round of hearty "oh you are just so creative"s rather than shocked and slack-jawed disapproval.

PS: I have reached the point in the recital season where my sewing studio looks like this and all I want in the whole world is to be able to vacuum the bloody floor: 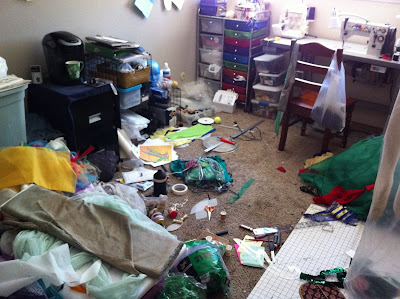 Email ThisBlogThis!Share to TwitterShare to FacebookShare to Pinterest
Labels: can I be done with this now please?, CATS!, deviant art, dragon, egypt, egyptian, I am so tired of this recital guys, it's just that easy, projects, recital, sewing, tails, the creative process, ugh, wings

You know how everything that has the word "wedding" attached to it automatically sells for double the cost of the exact same thing without "wedding" in the name? Like, if you go to a grocery store and say "I need a birthday cake for fifty people" they will charge you $100 for it, but if you say "a wedding cake for fifty people" they will tell you it's $250? Ballet is the same way. If it has the word "ballet" in it or is sold at dancewear stores it is going to cost you SO MUCH more than the same thing at Hardware Hal's or Francine's Fabrics. To wit:
After a few short months of use my latest pointes died ingloriously. I suppose it shouldn't surprise me, but it does irk the crap out of me. So I decided to go the jet glue route in hopes of a few more weeks without major damage being done to my bank account.
So, did you know that pointe shoe glue is basically just jet glue? And that jet glue is basically just SUPER GLUE? Instead of paying $15 for shoe glue at the only dance store in town (which is still half an hour from my place and has the WORST parking "lot" I think I have ever seen) or ordering jet glue from Amazon and waiting a week for it to arrive I just raided my husband's glue-and-tape drawer (to be fair I am the one who organized it in to it's own drawer. Look, we have several dozen rolls of packing tape in this house but I can never find an open one when I need to ship something) and found the tubes of super glue we had purchased for attaching the cat's claw caps. TA-DA!
There is just something about disemboweling an $80 pair of shoes with a razor that makes the poor kid in me ("we're not poor, we have each other!") cringe a little bit. But I can highly recommend tearing in to a pair to see what is going on in there. For instance, I discovered that my right shoe is feeling noodly because it has developed a fault-line of near San Andrean proportions right across the arch. Which means that any day now the damn thing will snap right in half while I am trying to do something important. That sounds safe AND comfortable. YAY!
New shoes. New shoes need to happen. SOMEONE please build a new dancewear store in central CA. One that sells plastic shoes and has ten charming young fitters available at all times.

Email ThisBlogThis!Share to TwitterShare to FacebookShare to Pinterest
Labels: glue, jet glue, pointe shoes, pointy pointy, shoes, super glue, why would I pay so much for something that I can buy at the dollar store for realios?

Why U put such big ugly tags on the OUTSIDE of your dance skirts? ARGH. 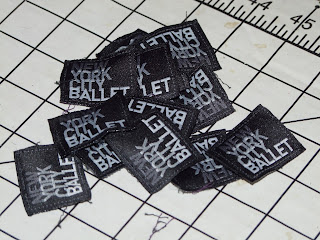 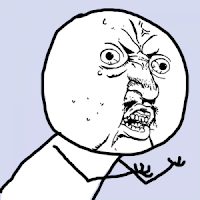 PS: I do love this, though: When you tear open a garment and find a little memento of it's construction frozen in time, like this chalk mark at the CB waistline. Makes me feel a little closer to the other hands that have worked on it: 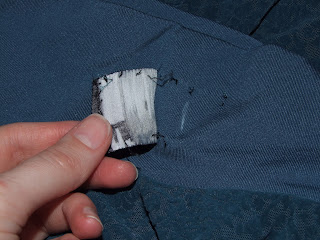 Every year come recital time we have a few solid weeks of experimentation in the classroom while the choreographer (my teacher) works out her game plan. And every year we seem to end up doing endless turns around the room in a circle. This never works. Never. It makes people dizzy to the point of colliding with one another. It never looks good, and it's tortuous to practice until it does look good, so eventually it just tapers off and we forget it for another year. I'm hopeful we have gotten it out of our (AKA my teacher's) system for the current year, but we may be stuck with it for another month or so until it really sinks in that this isn't happening.
Stop trying to make this happen. It's never going to happen.
Posted by I Will Fly at 1:00 PM No comments:

Email ThisBlogThis!Share to TwitterShare to FacebookShare to Pinterest
Labels: awkward, barfy, can I be done with this now please?, dizzy, make it stop, recital, teacher, terrible at this, turning

Have You Tried Ferrous Squagaldine Supplements?

We've discussed this before.
You can't believe every claim of a miracle cure-all that you see online or read about in Oprah magazine. The list of fabulous natural "remedies" I have tried is ridiculously long. And you can add a new one: turmeric. ERRYBODY be on about turmeric these days. I gave it a shot, what can I say? I carefully researched the right type to take and what additives it needed/didn't need. Then I faithfully took these freaking pills as big as a damn house twice a day for TWO MONTHS. And I got nothin'. Sorry, guys. For the record? Turmeric belongs in tasty curry. I did try a facial cream with turmeric, and that seems to help a little with skin yuckiness, but the benefits have not extended to taking it internally for my RA. My husband (chronic migraines) also gave it a try to no avail.
Maybe you'll have better luck, a lot of people say they love it. But seriously? Who wants to gag these suckers down on the regular, anyway? 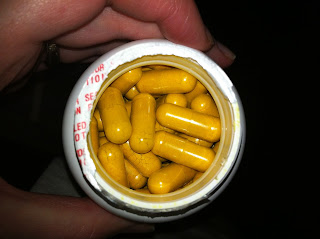 Things that did work:
-flaxseed oil (technically any Omega-3 supplement. Fish oil and krill oil would also work BUT they are environmentally disastrous, cost more, and make your ENTIRE BEING smell of dead fish)
-acupuncture (but only when used once a week or so, longer breaks than two weeks just made it all worse so I had to give it up)
-drugs (NSAID, tricyclic with low-dose SSRI, painkillers)
-exercise (ballet and biking for me, please, y'all can do whatever)