We got word today that we finally found a new place to live. SO... we'll be farther away from the ballet studio, but at least we'll also be ten blissful miles and 15 beauteous minutes away from our current asshole neighbors (pro tip: spoiled college students who have rich daddies to pay their rent make terrible neighbors)
ANYWAY!

I have solved my worst issues with my new pointe shoes, just about in time for the shanks to get all flubbily. Woot. I think the problem was slightly different sized feet (solved with decapitated socks) and a heel that slipped off perpetually (solved with silicone seam sealant on the insides of the heels).
I went ahead last week and sewed the leather patches the shoes came with on to the platforms. They squeaked dreadfully for an hour or so, but it's worn off (thank god). Dancing with the patches is a very different experience, actually. It's noticeably more difficult to turn/etc with them, but also easier to stick piques instead of hitting the wrong angle once in a while and falling on your ass (I don't think I ever have, but I've been close and I've seen it happen).
I sewed on the patches. It impressed my teacher, but I can't seriously recommend it. Glue that shit on if you know you aren't going to want to take them off again. For one thing the stitches are going to break eventually and I'll be back to square one.
Sigh... 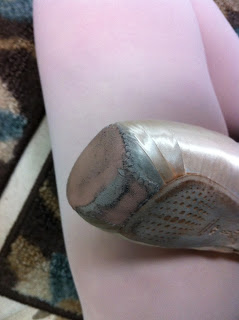