This has been my first full week of honest-to-goodness classes since my foot bruise incident. I even did a full two and a half hours of class last night, including an hour en pointe. It wasn't as bad as I had feared! The bruise feels fine, astoundingly. The end of my big toe is still sore the next day, and I can still feel my calves, that's for sure. But I think I owned it pretty hard, all things considered. I was just exhausted by the end of the day.
My teacher was amazed I made it through, and I have to admit that I am pretty amazed, as well.

Several times now my nearest and dearest friends and relations have grumped at me pensively "I've never even seen you dance!" as if for some reason they would actually like to witness such a thing. I was reminded of these comments last night. While attempting a ridiculous (everything is ridiculous in pointe shoes. It's like wearing cinder blocks on your feet) waltz turn combination across the floor, my teacher announced that she was giving us tougher combinations because she wanted to get us to actually dance. And I thought "Pssh! Woman! If I wanted to dance I wouldn't be in ballet class!" 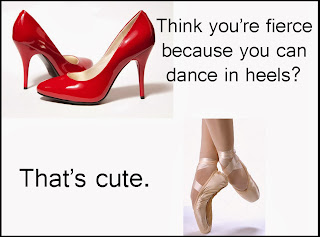 Email ThisBlogThis!Share to TwitterShare to FacebookShare to Pinterest
Labels: back in the saddle, bruises, class, dance, foot, I'm just not very good at this dancing thing let's face it, injury, pointe