So. Today is my official two year balletversary. Two years! And I haven't given up, yet. That is pretty astounding. I get frustrated sometimes. Hell, even my teacher gets frustrated with me sometimes. My posture is horrifying, because I have scoliosis and arthritis and I-was-raised-after-parents-stopped-telling-you-to-stand-up-straight-itis. And for some reason I could pirouette four months ago, but now I cannot. It's like you hit a plateau... except sometimes you don't just hit a plateau. You hit a downhill slope. And suddenly you are over-thinking everything and things that used to work out okay are now a hot mess. Like chaînés turns. CURSES upon chaînés turns right now, guys. In fact turns in general can basically bite my shiny metal you-know-what right now.
Oh god, that was a Futurama reference. I apologize. I swear that I have never said that before in my life.

So, it's been two years. And there are things that I can do today that I could not do a year ago. There are sure as hell things I can do today that I couldn't do two years ago. I was in much worse shape, back then. While I often regret not getting around to it sooner, the fact is that I am just happy to have gotten around to it at all. With the body I have been given, and the questions that I have to live with every day (what's going to be the next part that catastrophically fails? When am I going to deteriorate to the point that I am confined to a wheelchair? This all sounds very fatalistic and silly and you have my permission to ignore it) I am just proud of myself for not folding up and calling it quits. I'm going to use this body, as awkward and clumsy and ill-suited to dance as it is, as much as I can while I've still got control over it.

To that end I took the pointe test on Thursday. My teacher had said "in a couple of weeks" but then a few days later she said "this week". Which was unexpected and alarming. I hadn't even had a chance to buckle down to the relevés and duck-walking I had intended to! But, once I knew it was coming I just wanted to get it over with because I HATE TESTS. So when she forgot about it I timidly said "hey, let's do this thing so I can get it over with and go spend the rest of the night sitting in a small dark corner of the room and shaking slightly." Well, okay. Maybe I didn't say exactly that.
Anyway.
And so then this happened: 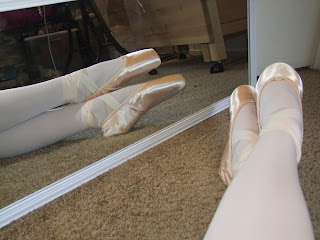 You are asking yourself how comfortable they are. The answer is "not" as in "not even at all comfortable what the hell was I even thinking oh crap now I guess I am stuck with it"
But aren't they pretty?
Posted by I Will Fly at 6:51 PM