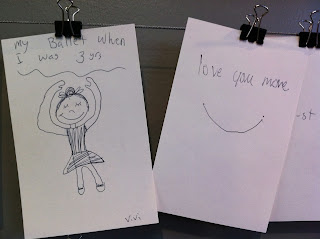 from an interactive display of "your first memories" in the social
sciences department. My first memory, BTW, is of building a
snowman with my mother OR possibly of taking a bath in our
purple bathroom.

My husband and I have been on "vacation" this week, in celebration of our seventh wedding anniversary. We usually go to the redwood coast for the week, but the sick cat is keeping us much closer to home this year. Three trips to the vet in just one week. Yeah, I know, right? Anyhoo... I took the week off from ballet. I know what you are thinking. "A whole week? And when you just got promoted to pointe? GASP AND SCANDAL!" Yeah. Well. Sometimes we all need a little bit of a break to remind us of why we do something in the first place. Ballet is not my job, and it shouldn't feel like it!
But don't think that it never crossed my mind. Aside from the constant reminder of class while wearing my pointe shoes under fuzzy socks and attempting to help my husband install bookshelves in the stairwell (DANG those suckers are slippery! I am lucky I didn't kill both of us.) I also made sure to strike a lot of ballet poses while visiting museums.
We took a day trip to San Francisco to visit the new Exploratorium. Which, if you don't know, is probably the best science museum in the WORLD. No, really. Like, it's been voted the best in the world pretty consistently since it opened in 1969. It's really pretty great, if you like or are interested in science. Hell, even if you DON'T give a crap about that stuff it is totally worth the time, effort, and money to visit. It's entirely hands-on and interactive. I think the Exploratorium is solely responsible for me having any faith in humanity, these days.
So anyway. We were at the Exploratorium and in a quiet corner we found an exhibit that involved walking across a stretch of gravel while the noise you make is monitored and scored. The idea being that you were supposed to walk as quietly as you could. I did pretty well at it by always stepping in the footprints of the person who went before me (where the gravel will be more compressed) but then there was a video about the best way to silence your steps. It's called "fox walking" and apparently is a big deal amongst people who do the whole survivalist thing (for very little reason that makes sense, other than hunting in close quarters, I suppose). But here is how you do it (or at least the version of it they showed us. Honestly there appear to be other versions floating around on the internet but WHATEVER):
You step on to the ball of your foot, then roll through the rest of the foot and place as little weight on your feet as possible. So, in other words: walk like a ballerina. Anyway, it kind of cracked me up (PS: it worked, too).