So, last week at work we were working on tutus and leotards for a play that opened over the weekend. The tutus started life as very generic and plain little white classical rehearsal tutus that we added trim to and fitted with pockets (for holding the confetti. They were snowflakes, you dig?). What we ran out of time for before dress rehearsal was tacking the layers of netting together (because for some reason the shop doesn't have a tacking gun? Really? How hard is that?). I sincerely hope the other people in the shop managed to get them tacked properly before the show opened because at rehearsal they were causing a serious case of "chicken butt".
You know. Chicken butt. Where an untacked tutu flips up instead of standing straight out from the hips and makes you look like you have a little birdy bottom. I searched on Google for hours trying to find a photo of this phenomenon, but to no avail. For some reason the search term "chicken butt tutu" simply does NOT bring you the kind of images I was looking for.
It was with some amusement, then, that I saw the incomparable folks at tutu.com post this photo over the weekend, of a person wearing an untacked tutu and suffering from chicken butt syndrome: 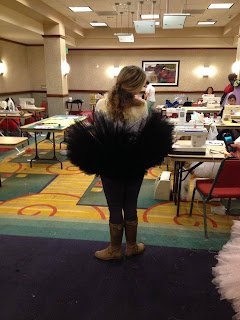 Chicken butt.
Maybe you need to have seen a lot of chicken's butts for this description to make sense.
Funnily enough, though, I was just searching for a picture of a plain white rehearsal tutu to link to above when I came across this photo on Ebay of a model trying desperately to pretend that her tutu hasn't got a case of the chicken butt. But we aren't fooled: 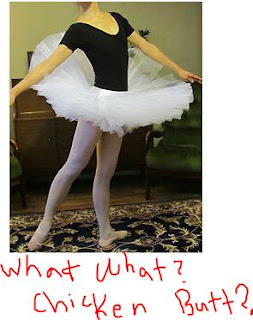