Yoga For the Elderly, Decrepit, and Infirm

So, many moons ago (back in August, after my Summer job ended but before I started taking ballet) I was in the worst shape of my life and was seriously having trouble with the little things. Pain had become a constant in my life and I had just folded in on myself. Along with everything else, rheumatic conditions come along with a physical exhaustion that was not helped at all by the medications I had been prescribed, one of which is a sedative. And, my Summer job is HARD WORK, it's terribly brutal to my wrists and hands. I bring wrist braces to work and coat myself from the elbows down in Icy Hot two or three times a day. So, exercise? Not even happening. But, I decided that I was done looking sadly at the ballet studio's class schedules and that it was time to DO IT.
I knew I was out of shape and that it was going to be hard for me to get back in to the groove of regular exercise. So I decided I was going to do yoga every day in preparation for this whole ballet business. When I was in high school I came home every weekday afternoon and did yoga on the living room floor. My favorite things to do were shoulder stands (woo!) and sun salutation. I knew I couldn't put any weight on my hands and wrists anymore, so those were probably out. I looked around on Netflix and found "healing yoga for aches and pains" by these people. They aren't too annoying considering what else is out there (I have a preeeeeetty low opinion of most video exercise instructors).
I did it for a few days and I was feeling good! It was seriously difficult, though. I mean, really hard work. Now, this is what I affectionately call "old people yoga". Most of it is done sitting in a chair. Everything is modified for stability. But even so, MAN did I have a hard time with it. GEEZE. At one point in the video there is a modification of "eagle pose" (in which you cross your arms over each other at the elbow and link your hands to one another with your palms together) and it was so impossible that I quickly did a screen grab and this happened: 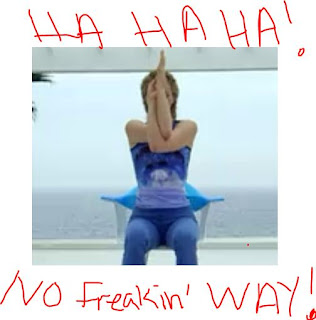 Anyway, so it was hard, but I was feeling progress. Unfortunately by the end of week one something was terribly wrong. My knees hurt. And so I stopped doing anything that could bother them. No weight bearing poses. Nothing. But then... they kept hurting.
They never stopped.
I started ballet class not long after that. The knees slowly became a part of my life. My doctor increased the dose on my pills. I learned to sleep with a heating pad and ice packs and spend as much time as possible in bed on any day when I knew I was going to be dancing. And yoga? I kind of forgot it.
So last week I decided to try out old "healing yoga for aches and pains" again. After all these months of ballet the entire thing is easier in a major way. It's not something you would notice if you were doing it consistently, but after a break for several months the difference is obvious. I still can't do anything that places my weight on my knees, though, so I have to skip the one posture they teach that involves that.
I was feeling pretty cocky about it after a few days and decided to try out another one of their videos, "yoga for common conditions". And boy howdey, that was a mistake. After the first three postures all involved either kneeling or folding the legs, I gave up. I can't even sit cross-legged on the floor anymore. So, my search for a new and gentle yoga program for ancient old codgers continues.
Updates as they become available!

Email ThisBlogThis!Share to TwitterShare to FacebookShare to Pinterest
Labels: ballet, evidence of hard work, knees, netflix, no one to blame but myself, old people disease, pain, rheumatism, the matkins are not all that annoying, video, working hard or hardly working, yoga