Princess Furball (or Whatever)

My instructions for this were just that it had to be a Cinderella dress that "looked like the sun". I'm not certain which version we are dealing with, but that pretty much sounds like Peau D'ane to me. Or Catskin, or Sapsorrow, or Princess Furball, or... You get the idea. Princess Furball was pretty much my jam back in elementary school. That and The Paperbag Princess.
So, anyway. Peau D'ane is a Cinderella story with a princess who goes to three balls, wearing three beautiful gowns: one as silver as the moon, one as golden as the sun, and one as sparkling as the stars. There you go, that is pretty much all you need to know.
I was given a plain little white romantic tutu and an ugly (and boxy) thrift-store Indian (?) skirt and blouse of orangey cationic chiffon with beaded front panels. And then told to do whatever. But without being able to fit the dress on the girl who will be wearing it, so it needed to be somewhat adjustable, stretchy, and forgiving. I was also instructed to add sleeves come hell or high water. This is what I ended up with using only the materials provided: 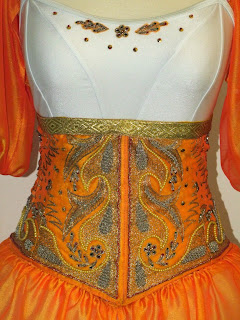 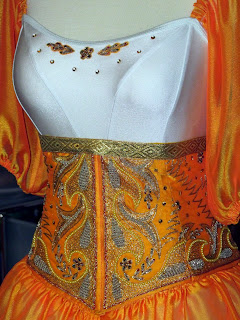 It really did not photograph well. And in the end I had to get it done in a hurry, so some of the sparkle and jazz that was going to go on the white bodice never happened. Sigh... Anyhow, I left the boob region mostly uncovered, for the sake of fit. The little underbust bustier thingy laces up the back (again, for the sake of fit) and I love it and want one! The sleeves are puffy, which you would be able to see if I had bothered to put the arms on my display form. The skirt is slit down the center front so that the white skirt tulle flashes through as she leaps, mostly to balance out all that white on the bodice that I couldn't get rid of. It looks pretty awesome on the girl, but I am almost sure she despises it because it takes so long to get in to and requires a helper. I dunno, guys, I just don't know.
Posted by I Will Fly at 12:06 AM