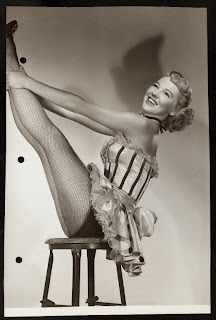 Meet dancer, actress, and opera singer (triple threat, boo-ya!) Betty Luster, primarily known for her staring role in a weird little promotional film for a musical instrument company in 1956. Mr. B Natural. The film is famous for it's featured appearance (and later running joke) on the cult TV show Mystery Science Theater 3000 (which was basically a huge part of my childhood). The joke being, of course, that "Mr." B was considerably less convincingly male than Cathy Rigby in any given performance of Peter Pan. Considerably. After watching the short with my hubby recently I was inspired to look her up on the vast and fabulous internet.
When she wasn't gadding about as Mr. B she was actually a very cute ballet dancer. Here she is (in the weird 50s high-low costume and pointe shoes): 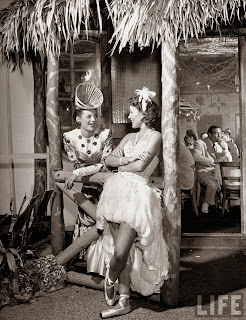 And, for the uninitiated, here is the full-length un-riffed version of Mr. B Natural. Just, you know, in case you are aching for a little awkward mid-century surrealism. It also features some pretty darn adorable dance moves of the sort you make pre-schoolers execute in "creative movement" class:


PS: I always thought I would, if I ever went to a comic or sci-fi convention, go dressed as Mr. B. I have the figure for it, and the hair, and everything! Sadly, however, it has already been done. A lot. So never mind. On the other hand: Mr. B Natural pony! 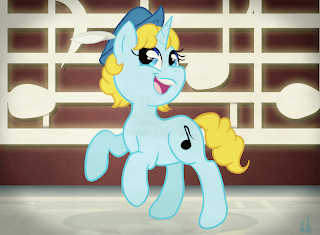