Who is the Patron Saint of Bloggers? There Must be One.

Warning: I don't know nothin' 'bout nothin' when it comes to religious razzmatazz. I just happened to run across a list of the patron saints of stuff tonight and I spent a few amused minutes searching for random afflictions and seeing what popped up. There is a saint of insect stings, guys. No, really.
Anyhow...
Did you know that there is a patron saint of rheumatism and rheumatoid arthritis? Actually there are SIX! This guy here has got you covered: he's the saint of rheumatism, arthritis, milliners, veterinarians, and blacksmiths among many (and I do mean many) other afflictions, professions, countries, and whatnot. I'm particularly taken with him because his name is usually translated as "James" but can also be translated as "Jakome" the name of a beloved childhood pet cat. 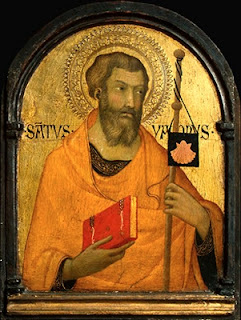 And, in case you were wondering, there are not one, not two, but three patron saints of dancers. Here is one of them, Saint Vitus. Who also, apparently, has a metal band and a neurological disorder named after him: 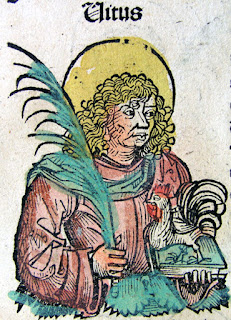 I wonder if that makes him the patron saint of metal bands, too.