SO. I had my first acupuncture treatment today.
I had to drive to this place that was half an hour away and totally unfamiliar, but I survived. I feel like each time I successfully navigate the freeways around here is cause for celebration. Did I tell you that I only started driving on the freeway in October? Because I did. In two months I have blossomed in to a veritable freeway-driving adult. And stuff. I wasn't terribly worried about the being poked with needles thing, I was more worried about the not killing myself on the road thing.
I found the building and went in for my inpokination. Do you like that word? I just made it up. If you couldn't tell. The ambiance of the room left something to be desired: 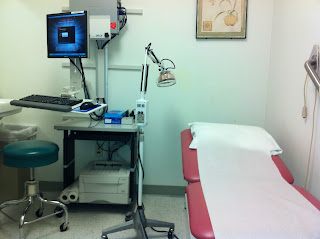 Hmm. A slightly dinged-up exam room with elderly paint on the walls. This should not be surprising. There is probably a protocol of some sort. You probably have to make every single Kaiser exam room look like every other so that no one feels left out of the fun. I don't know what I was expecting, though. probably dim lights, soothing music... maybe the tinkling of a (digital) waterfall. A smouldering incense burner in the corner. I don't know about you, but I am relaxing just thinking about it.
My acupuncturist was quick and easy to deal with. She bumped (most of them don't feel so much like being pricked as they do like being tapped on) fifteen needles in to my knees and wrists and then left me to sit in the dark under a heat lamp while I recovered from my sudden rush of dizziness (I always get dizzy in doctor's offices. Even if all they do is take my temperature and listen to my heart. Sometimes it's great because it makes them think you are in bad shape and really need some help. Other times it's not so great. Like when you have a bossy OB nurse practitioner who wants to lecture you about how you aren't living right)
It gave me time to feel sort of like taking a nap (that heat lamp is da bomb) and to study the acupuncture chart on the wall. There is one acupuncture point, for guys, that is ... well, I don't know what condition it treats, but you have gotta be in MISERY before you ask for that treatment, is all I'm saying. I don't have a picture for you because I am being mindful of your delicate sensibilities (and because, you know, my camera phone only got half the picture in the frame. Dang.) In 20 minutes she pulled out the needles, while accompanied by two auditors who were apparently there just to count how many needles you were stuck with? Uhm... useful, how? I'm sure it's some silly internal cost-effectiveness thing. Like Kaiser doesn't want them to use more than three packs of needles per patient or something.
I have a few tiny red spots now, but I don't think I even bled. Which is nice, because I was a bit concerned. I take a daily anti-inflammatory and it sort of thins your blood. So, when I poke myself while sewing (oh, two or three times a day at least) I bleed all over the place and it's awkward if I forget to have a pack of band-aids on hand.
Three hours later I can tell you that I don't see a bit of difference so far in my knees. They still hurt, as they did all night. Maybe my wrists are a liiiiittle bit better? Time will tell. Tonight I sew, tomorrow I dance, and the proof will be in the pudding (but not that birthday cake flavored pudding cup I just attempted to eat, which tasted like pure evil coated in artificially colored sprinkles).

Email ThisBlogThis!Share to TwitterShare to FacebookShare to Pinterest
Labels: acupuncture, fuckin' kaiser, Kaiser went with the East Berlin Before the Wall Came Down mood board when they met with their decorator., you are not my Doctor my Doctor drives a phone box