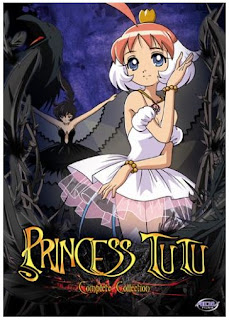 I appear to be catching a cold, which means I will probably spend most of tomorrow sitting on the couch drinking tea and watching Netflix. But you can't watch The Tudors ALL day, right? I mean, without wanting to strangle whoever put all those women in bodices without chemises under them. Or maybe that is just me. ANYWAY.

So, a while back Netflix noticed that I had watched The Red Shoes and suggested that I watch this.
Princess Tutu.
Now, is that the single worst title in existence or what? AnyWAY.

It's a magical girl anime. But... huh.
Well, it's about a duck who...
It's about a girl who takes dance lessons at some sort of boarding school in what I assume is Germany. And she is a super hero...
Hmm.
She's a duck who turns in to a girl who turns in to a magical ballerina super hero named Princess Tutu.
Okay.
Hmm.
And there is a dance instructor named Mr. Cat who threatens that his delinquent students will have to marry him and....

Okay. None of this is working. Let me just say this: The last episode I watched contained almost 15 minutes of dialogue between a duck and a lamp.
It's like Dali, at his most attention-whorey, wrote a magical girl anime based around ballet dancing. There is no fighting. Just dancing. It's...
It's so strange it keeps me coming back for more.
Posted by I Will Fly at 10:54 PM